FÊTEING AROUND WITH D.C. CRENSHAW 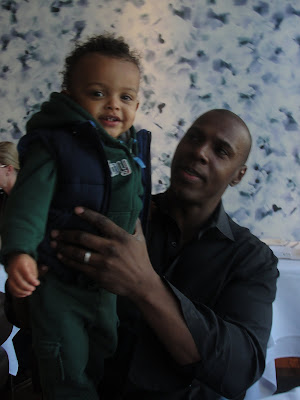 The first thing you notice when you meet D.C. Crenshaw is how drop-dead gorgeous he is. But once you get past his model good looks, easy smile and capacious charm, it’s easy to see why he is one of the city’s savviest industry insiders. While he’s attained a trifecta of achievements – owner & CEO of Fête Select TV LLC; co-host of the popular dining-sports show, Game Time Dine; and media celebutante – D.C. is most proud of being a loving husband and father.

Luxe File Chicago: You have had a very colorful career. Tell us how you got to where you are today.

D.C. Crenshaw: I have always had an affinity to promote things. In college, I was a Pre-Med major and a Linebacker on the football team but I’ve always enjoyed marketing because I am a very creative person. It was while I was working in the pharmaceuticals industry that I became an effective marketer and developed a passion for wine and fine dining. When I moved to Chicago, I noticed there were so many great restaurants that people didn’t know about. So I started my own dining club and then launched my company, Fête Select TV LLC.

LFC: Why did you name your event marketing company, Fête?

DCC: I wanted a name that was simple and described what the company was all about. We searched for words that correlated “dining” and “fun”. Fête means “party” and “to celebrate a special occasion” in French. Everyone liked it.

LFC: What inspired you to create Game Time Dine?

DCC: Chicago Bears' Adewale Ogunleye and Israel Idonije had taken a trip to Africa and their publicist approached me about getting them on my online TV show to talk about their experience and the cuisine. We never taped the segment but I thought it would make an interesting show - take these guys with me to different restaurants and talk about food and football. Israel liked it but Adewale couldn’t get involved because of his schedule. We shot a pilot and Comcast picked it up.

LFC: Jen Patterson’s also a co-host on Game Time Dine. How did you come to work with her?

DCC: I met Jen through a friend of mine, Kristen Fredricksen-Skordilis. I didn’t know a lot about Jen other than her affiliation with Comcast Sportsnet so we chatted and I thought she would be great on the show. Jen does a fantastic job and I think it’s really cool to see women in sports.

DCC: Definitely Mike Ditka. He’s a real character and a very nice, generous guy. Tommie Harris, from the Chicago Bears, was fun too. He’s crazy and says things that are just hilarious.

LFC: If you could have dinner with any three people who would they be?

DCC: I would have to pick my two grandfathers. Both have passed away but I would bring them back just to pick their brains because they were so cool. I’d also invite Mohammed Ali, he’s a very interesting person.

LFC: Any future projects on the horizon?

LFC: If you could cook with any celebrity chef, who would it be?

DCC: I really like Marcus Samuelsson. He’s got incredible charisma.

LFC: If someone walked into your home kitchen, what would you be cooking?

LFC: You have built a successful career and are a loving husband and a doting father. How do you find time to do it all?

DCC: (Laughing) Excellent time management! Ever since I was in Junior High, I've had to find a way to juggle sports and school. So it’s not so different when you have a family. At home, I’m “Mr. Mom” because I work out of the house and I take care of our son, Tru. It can be challenging factoring in my appointments, conference calls and the after-work events with his feedings and family time but we just find a way to make it all work.

LFC: Who are you wearing right now?

LFC: In Chicago, where's your favorite place to dine?

DCC: I don’t have a favorite spot, it just depends on what I’m in the mood for. I really like C-House and Mercat a la Planxa. For sushi, I head to Sushi Wabi or Wakamono in Lakeview. For Italian, I love La Scarola or RoSal’s, a small, family-owned restaurant in Little Italy.

LFC: You have been a long-time supporter of President Obama. How did you first meet him and how do you feel his presidency is going?

DCC: A friend of mine introduced us. One time we were having lunch together and I told him I was interested in politics. Barack told me that the next time he ran for political office, he wanted me to get involved. When he announced he was running for the U.S. Senate, I helped him organize some events. As far as how he’s doing now, I think he’s doing a good job. I think he’s going to make mistakes, like every president does, but he’s trying to make positive things happen. And that’s the key.

LFC: As a parent, what advice you would like to give to your child?

DCC: Strive for your dreams and always try your best. It’s okay to fail, but never give up.

DCC: (Smiling)…always live within your means.

Story and photography by Kerry Shorr